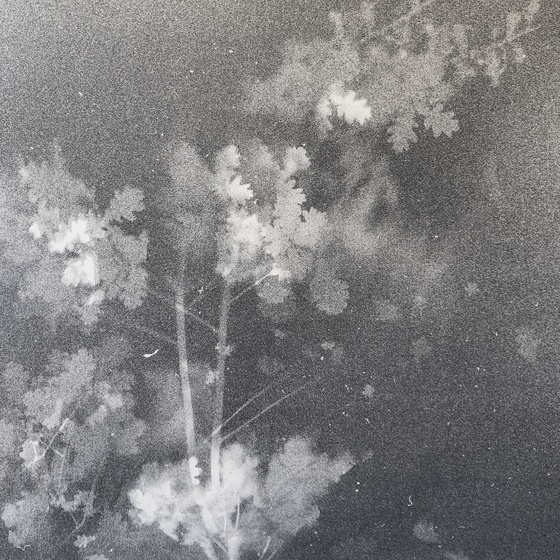 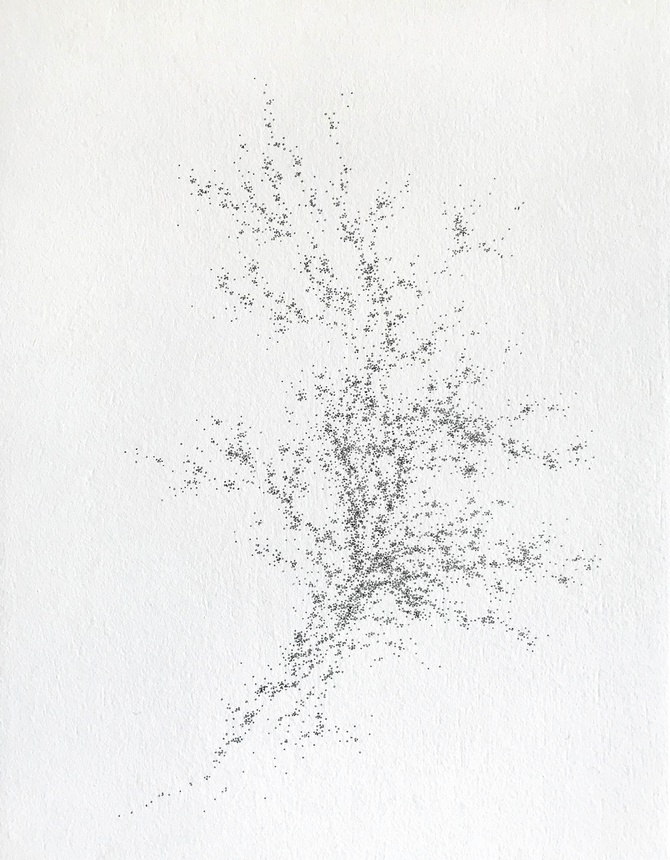 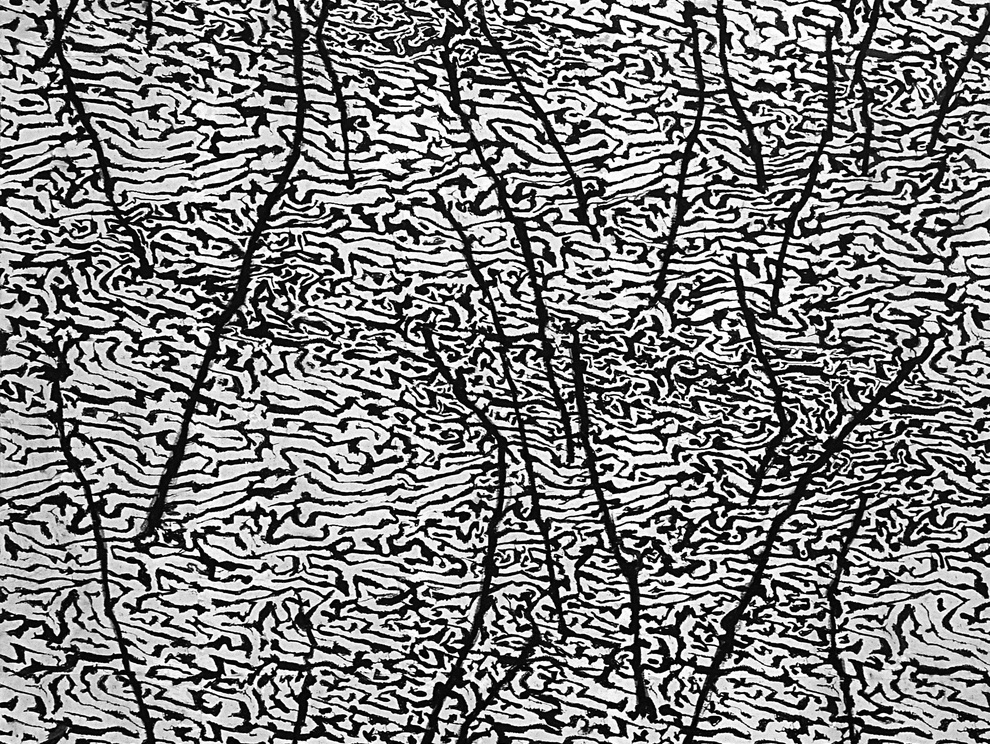 Taking as title and starting point recurring themes within the artists’ practice the exhibition focuses on mainly monochromatic works celebrating the power of quiet contemplation that allows us to create space to connect with ourselves and the world around and within us.
The absence of colour serves to eliminate distractions allowing for a heightened sensory focus but at the same time gives rise to a liberating effect for both artist and viewer. Light and shadow, composition and materials create an interplay between a feeling of presence and ephemerality, a grounding density and an ethereal shift towards the numinous which allows the work to speak of the invisible. The dream-like atmospheric paintings create a world of their own but also become gentle guides that give permission to the viewers to immerse themselves in their own journey and experience.

Emburey, Kikuma and Whishaw employ a distinctive visual vocabulary on the edge of identifiable form, often comprising recurring patterns, mark-making and the use of the line. The artists turn to the natural world not just as a source of inspiration but also as a means of contextualising the human experience. The process of making is slow and considered, constantly manoeuvring between the accidental and the intentional, spontaneity and focus, introspection and expression. The work explores personal histories alongside timeless and universal concerns remaining unconfined by formal considerations.

Jana Emburey’s meditative micro/macrocosms explore the ideas of interconnectivity, oneness and universal natural dynamics. Using a rich visual vocabulary, from complex, intricate compositions to fluid soak-stain abstract topographies, she considers humanity’s place in the cosmos, time and space. Emburey approaches the work mindfully, as an expression of a state of consciousness, with the experience of the process, alternating between single point focus and an expansive state of flow, inextricably linked with the outcome.

Her Oblivion series of works consist of thousands of tiny circles/cells individually hand-drawn using dipping pen and acrylic inks on painted Japanese Kozo paper (washi) stretched on board. Emburey traces her inspiration back to her research drawing parallels between the process of cell division observed under a microscope and patterns of human behaviour, the human condition and its relationship to cosmic dynamics of which we are often unaware. Each of the tiny cells is complete on its own but also an integral part of a greater organism, which may be simple or complex like the universe itself, as in Interstellar, 2021, one of Emburey’s most intricate compositions to date. Emburey describes the lengthy process of making these works as incredibly absorbing as it is slow, meticulous and precise. She likens it to meditation, inviting you to slow down, concentrate on your intention but, at the same time, expand your awareness.

In Emburey’s works on canvas the language becomes more fluid. Precision and focus give way to a state of flow; she works with acrylic in way that is reminiscent of water colour and ink. Although non-representational, Emburey often describes these paintings as landscapes or internal topographies; at times nebulous, at times visceral, the paintings appear as a portal between the inner and outer world. The tiny ink cells, used sparingly in these works, serve as a reminder that the two are one.

Also included in the show is a rare figurative/photographic work from Emburey’s Ephemeral series of flour drawings. The medium of the original drawing was chosen to signify the transient nature of being, the flow and energy of the moment as it becomes past. The drawing was photographed and later swept away with a brush leaving the image as the only trace of its existence.

Yuichiro Kikuma's paintings incorporate non-painterly methods to create conditions for unexpected images to emerge. In recent years he has predominantly used black ink and explored household devices as mark making tools; these tools enable him to work indirectly, often in a mechanical and repetitive manner which leaves space for calculated chance. Kikuma’s works attempt to visualise the invisible forces, patterns or rhythms that exist around us in daily life, in the same way as any landscapes are created as a result of their specific climate.

In Variations, a series of mainly monochromatic works on calico, Kikuma’s imagery, vaguely reminiscent of Sōsho (a cursive, fluid, almost abstract style of Japanese calligraphy), appears as a manifestation of energy oscillating between verve and a haunting sense of harmony and balance.

The paintings are monochrome but, like in Sumi-e painting, tonal differences, the effect of highlight and shadow and the active role of the background suggest a whole spectrum of colour and movement, favouring perceived spirit and essence over direct imitation.

Reversing the technique, instead of brushstrokes Kikuma uses branches, leaves, twigs and flowers to create silhouette effects or traces, reminiscent of a photographic printing process. In another reversal, ink here plays the role of light in photographic exposure, misted in layers while he directs the composition by constantly moving the objects as one would direct a brush, in a choreographic interplay between spontaneous gestural expression and planned action.

Driven by rhythm and pattern in both inspiration and process, Kikuma likens the making of these works to making music, using sampling and rearranging, a visual rendition of ‘musique concrète’. The found objects become compositional resources like sampled sounds whose creative manipulation leads to an entirely new composition while still allowing their uniqueness and essence to manifest itself.

Anthony Whishaw RA is an English artist whose œuvre, spanning over seven decades, defies categorisation. It is rich and diverse, monumental yet sensitive, thoughtful, often whimsical, and above all, timeless and unexpected. He claims no association with any particular movement stating instead that “each painting and work on paper makes its own separate demands”.

His work deals with explorations of memory, ideas and experience; he is not concerned with reproducing an observed fact but with discovering or creating a new reality. On the edge of representation, varying in intent, scale and depiction, the work seeks to reconcile illusion and allusion, the abstract and the figurative, past and present pictorial languages to create unforeseen visual experiences. He admits to working on many ideas concurrently, with some paintings being worked on over many years, sometimes decades, a process that leads to unique, unpredictable hybrids.

Downstream (2004) is an important work, representative of a series of paintings Whishaw created in the early 2000’s. The inspiration came on a rainy day when he became mesmerised by the shifting patterns in a water puddle near his studio and captured the experience in an ink drawing focusing on the positive and negative shapes he observed. This original drawing, along with photocopied or cut out iterations varying in scale, shape and focus, were used time and time again in combinations of painting and collage, to create bold, transfixing, textured works relating to the qualities of water. In Downstream, Whishaw’s “reflections on water” reveal its energy, all at once calm, turbulent, all-encompassing and hypnotic. His bold and expressive lines serve as signifiers of movement and energy directing the gaze; but the longer the gaze lingers, the more it is guided back to taking in the whole, the essence, in a continuous flow with no beginning or end. The transfixing contrast of black and white is gently interrupted by a hint of colour which acts as a subtle current that springs the image and the viewer back into the realm of the present.

Dots are another element that Whishaw often uses to suggest movement and energy. They first came into his work in the mid 1970s when he moved from oil paint to acrylic. They gradually became more prevalent in his compositions, often used as a structural element to suggest a pathway for the unconscious movement of the gaze. In his works on paper Snow Fog (2018) and Driving into a Storm (2017-2019), they appear to represent not just natural elements but also sources of light or flow of energy, morphing into shapes that reveal a fragmented version of reality, one “which has yet to assemble itself”, capturing the unseen, the idea of an image right before the point of perception.

In a similar way, in Whishaw’s only purely figurative work in this show, a small ink sketch from 1964, we get a glimpse of the power of his draughtsmanship. The figure appears seated yet the image feels far from still, it is evocative of movement, intimacy, life and presence. Whishaw’s confident, expressive line, used sparingly, with tenderness and intent directs the gaze in a way similar to Downstream capturing both the micro-movement and the whole, the essence of the person rather than just the form.

Established in 2015 with a primary focus on painting and drawing, the gallery has built a reputation for eclectic, immaculately curated exhibitions and its commitment to championing early career artists.