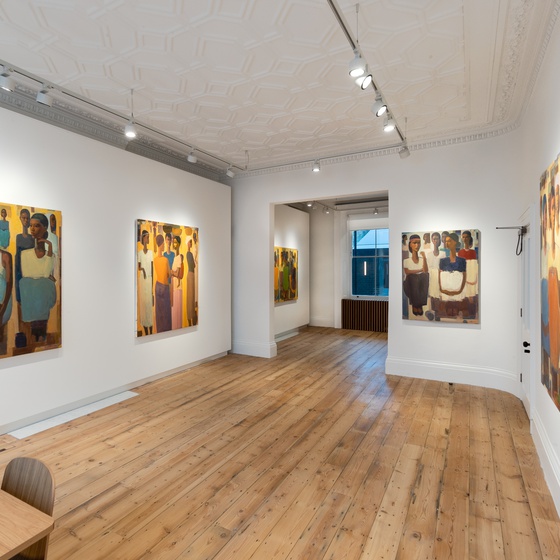 What's On / Past exhibitions / Tadesse Mesfin, Pillars of Life

Tadesse Mesfin (b. 1953) is a giant of the Ethiopian art scene. He holds a unique position as both a figurehead of the Ethiopian modernist movement, and as a long- time educator through his role as a professor at the influential Alle School of Fine Art and Design in Addis Ababa. Among the generations of painters he has taught are Addis Gezehagn, Ermias Kifleyesus, Merikokeb Berhanu and Tesfaye Urgessa.

Mesfin’s latest work is a continuation of his ongoing series celebrating the women who work as small-holder vendors in markets found across Ethiopian cities. They can be often found crouched down amongst their agricultural produce, as they wait for customers to approach. In Mesfin’s work these women are visually eulogised, their occupations and their personae are front and centre, and the observer is persuaded to appreciate their importance to the communities they serve. The paintings defy the limitations of perspective, as the figures seem to float in their crouched positions, their forms often abstracted through loosely defined brush strokes. Only their regal, statuesque poses and facial expressions are clearly discernible.

Mesfin has stated that his previous fascination with the West-African tradition of mask-making prompted him to create his own “Ethiopian masks” from the expressions found in the faces of the women occupying his canvases. Their pointed chins and captivating stares are a nod to West-African masks; however, the distinctly Ethiopian features give them their own unique appearance. Each figure is carefully weighted in these paintings with a mathematical precision born of decades of practice. There is often a central protagonist who is the focal point, slightly off-centre in accordance with the golden section rules of proportion, counter-balancing the figures in the background.

Mesfin’s artistic career spans more than five decades. His painterly style has been greatly influenced by numerous changes in his environment, from a seven- year stint in the USSR, where he studied architecture and sculpture in St. Petersburg, to projects in rural southern Ethiopia, and artist residency programmes in the United States as a result of winning the 1998 prestigious Mid-American Arts Alliance (MAAA) fellowship.

As the first local space and international platform based in Ethiopia, the gallery focuses on highlighting modern and contemporary fine art from the Horn of Africa region and its diasporas.