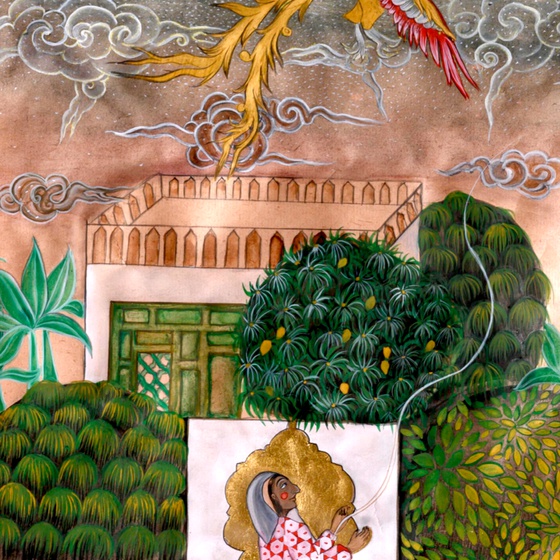 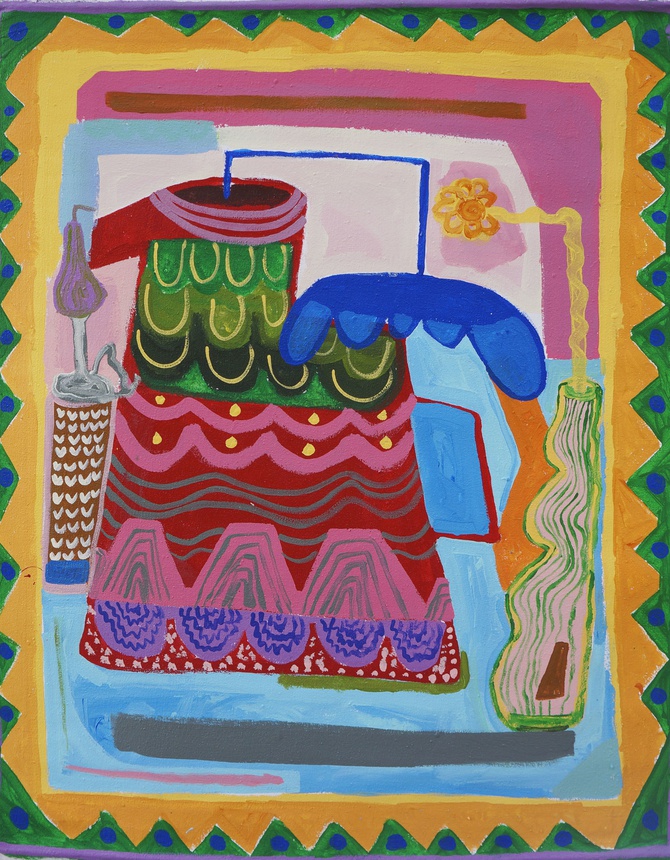 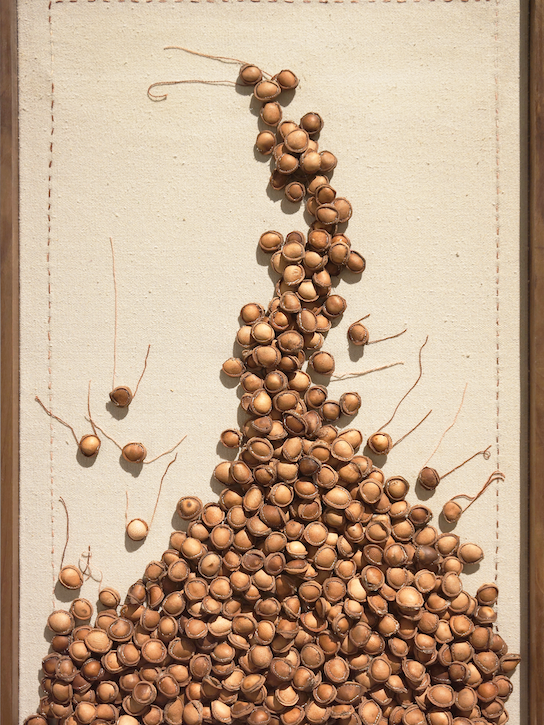 What's On / Past exhibitions / Summer Exhibition

The Summer Exhibition will present a showcase of artists from the gallery based in Jeddah, Saudi Arabia.

Zahrah Al-Ghamdi
Zahrah Al-Ghamdi’s (b. 1977, Al Bahah, KSA) work explores memory and history through Traditional architecture in both medium and assemblage. Her site-specific work sees the Laborious and meticulous process in which she assembles particles of Earth, clay, rocks, leather, and water. Both medium and her process of making draw on the notion of ‘embodied memory’ to translate and delineate themes of cultural identity, memory and loss. Al-Ghamdi grew up in the Southwestern region of Saudi Arabia. She then moved to Jeddah where she completed her undergraduate’s degree in Islamic Arts from King Abdulaziz University. She holds a Master’s Degree in Contemporary Craft from Coventry University in England, where she also obtained her P.H.D in Design and Visual Art. Her thesis analyses traditional domestic architecture from South Western Saudi Arabia in contemporary settings. Indeed, growing up in that region, surrounded by traditional Aseeri architecture, has played an integral role in her practice. She is a faculty member of the Islamic Arts Department at King Abdulaziz University.

Nasser Al-Mulhim
Nasser Almulhim (born in Riyadh, 1988) is a studio artist based in Riyadh. Nasser holds a bachelor’s degree in Studio Art from the University of West Florida. Since that time, he has been creating work that represent his inner imagination and apply it into two- dimensional imagery. Concentrating primarily on the idea of abstraction and interaction of geometrical, organic and non-objective shapes. He employs various methods to create this spiritual healing process between the within energy and the universe power to reach to what he refers to as "the gate to self-healing". A principle theme in Nasser work is the power of spirituality and how it could be represented by using colours as healing method to express the inner emotional the chaos and order within the soul to seek some answers in which the colour touches the soul itself. Also, study of colours in relation to human behaviour in which that colours could touch us energetically and psychologically. He aims to express both of these elements through his artworks. His interested in the idea of form and shapes and how each of them dances together to create rhythmic energies and healing force within him. His work is inspired from his examination of both the De Stijl and the abstract expressionism and speaks of the inner emotions and human psyche, making his works seems “therapeutic".

Afsoon
Born in 1961, Afsoon lived in Tehran until 1979. She spent her childhood in Iran and late teens and early twenties in San Francisco, then later settled in London. Her nomadic life is reflected in her work where East merges with West and the result is at once familiar and foreign. There are several layers in her work and at times she combines text with images as well as different techniques such as linocut, photography, collage and etching. The result is a rich yet often playful and humorous tableau in which the audience is able to engage and interpret in its own way. In January 2008 the British Museum purchased two series of her work for its contemporary Middle Eastern collection.

Sara Al-Abdali
Sarah Al Abdali, a well-known artist specialized in Islamic Art, who was born in Jeddah, Saudi Arabia, in 1989. She graduated with a BA in Graphic Design from Dar Al Hekma University in Jeddah, KSA in 2011. Later on, she obtained an MA with merit in Traditional and Islamic Arts from the Prince’s School of Traditional Arts in London, UK in 2012.
Al Abdali originates from the land of Hejaz, known today as the Western Province of Saudi Arabia. Her personal exposure to Hejazi culture has given her a sense of responsibility towards it and a deep appreciation of the land, architecture and heritage, especially since the drastic ideological and urban transformation in the past four decades.
From being one of the first Saudi graffiti artists, Sarah Al Abdali continued with exploring the language of expressing her interest in Arab culture and Islamic philosophy. Mainly, upon her graduation from the Prince’s School of Traditional Arts, Al Abdali’s art work developed and was more focused on the traditional Islamic crafts, which later on was explored through various innovative mediums, including; illustrations, miniature painting, ceramics, woodwork, mosaics and plaster carving.
Sarah Al Abdali’s work was shown in many local and international exhibitions around the world; she recently solo exhibited; “The Simorgh Always Rises” at Beit Al Sharbatly Cultural House in Jeddah, KSA (2019). She also participated in a number of group exhibitions, such as; “Cairo Biennale: Eyes East Bound” in Cairo, Egypt (2019), “Forgotten Enlightments/Halle14” at Halle, Germany (2019), and Miskulture xpo/ Institute Du Monde Arab in Paris (2018).

Ibrahim El-Dessouki
Ibrahim El Dessouki, dubbed ‘The Architect’ for painting the columns of the temples of Luxor and Karnak was born in Cairo, Egypt in 1969. He descends from a family of artists as his father Fahmi El Dessouki and mother Atyat Sayed were well-known and established Egyptian expressionist painters and free-thinking intellectuals, and both greatly influenced the artist that Ibrahim had become.
Dessouki's painting style is defined by his unique treatment of paint, which concentrates on his ability to create subtle changes in its texture; his unusual use of negative space; and his deft manipulation of shadow and light. While the artist's painting genres encompass portraiture, landscape and still life, Dessouki’s subject matter is very much Egypt-centric capturing his own unique and hypnotic perspective of the soul and essence of Egypt.

Mohamad Barrangi
Mohammad Barrangi Fashtami was born in the Northern city of Rasht, in Iran in 1988, and currently lives and works in the UK. He studied art at a technical school before he went to college and earned a Bachelor Degree in Graphics from the Islamic Azad University of Tonekabon. He then worked as a book illustrator and participated in several festivals. Alongside his artistic career Barrangi has gained recognition for his achievements as an athlete. He has represented Iran internationally in the 100m sprint.
Barrangi’s work combines elements of Persian calligraphy, storytelling, text, and touches of humor. Using a unique creative process, with handmade traditional calligraphy pens and a blend of mark-marking styles, he creates both small pieces and often expands these to large scale murals.
His artwork is inspired by traditional Persian illustration techniques, contemporary visual art techniques, as well as street art. Mohammad tries to portray characters with disabilities and usually combines human and animal traits to create dream-like scenarios that introduce strange, foreign yet beautiful objects.
Barrangi’s work has been featured in multiple publications, festivals, and prizes. He earned many honorees and awards, such as; the Recipient of Honorary Diploma, 5th Tallinn Illustrations Triennial in Estonia (2017), and won first prize at the Tragaluz IV international Award in Colombia (2017). In 2018, Barrangi had a Solo Exhibition at the Wakefield Cathedral in UK, and he participated in a number of group exhibitions such as; the “Human Right EDU” exhibition of UNESCO in Italy in 2018, and the “Common Ground” exhibition for the Platforma Festival at Vane Gallery in UK (2017). Recently, in (2019), two of his artworks have been added to the permanent collection of Islamic and Modern Middle Eastern Art.

Osama Esid
Osama Esid was born in Damascus, Syria in 1970. He currently lives between the US and Egypt. Esid is a well-recognized artist, working in photography to explore the subject of personal identity.
Esid had numerous solo exhibitions in Spain and France, and all over the world. He participated in many group shows; in Europe, the US and Africa. His work was exhibited in a number of museums including; the “Mori” Art Museum in Tokyo, Japan, and his artwork was acquired by the “Tropen” Museum in Amsterdam, Holland.
Osama received several awards such as; the Minnesota State Fair Fine Arts Award in the USA (2008), and in the same year he was awarded a McKnight Foundation fellowship. He holds regular workshops in alternative printing processes for photographers and artists; such as the project the “General Moallim” in Jeddah, Saudi Arabia.

Rashed Al-Shashai
Saudi artist Rashed Al Shashai utilizes found objects and appropriated imagery as conceptual means of identifying the signs of the everyday, creating what he describes as a ‘semantic field’ through which philosophical questions, primarily the purpose of human existence and the functions of society, can be explored. With playful forms, Al Shashai seeks to engage viewers with the signifiers of the mundane in order to facilitate a consideration of what might otherwise create tension.
Born in Al Baha, Saudi Arabia, in 1977, holds a Master of Visual Arts degree and is a prominent figure of the contemporary Saudi art scene. As a conceptual artist and arts educator, has been influential to a new generation of Saudi talent while also nurturing local artistic practices as a founding member of the Saudi Arabia Fine Arts society and the Art Education Society.

1. SARA ALABDALI
Maqboula in Her Garden in Taif (detail)
2018
Natural pigments, and gouache on paper
45 x 33 cm
Not part of an edition

2. NASSER AL MULHIM
All I need now is some fresh pineapple
2021
Acrylic and oil pastels on canvas
100 x 80 cm
Not part of an edition

With a mission to highlight the local arts and culture, Hafez Gallery has maintained a schedule of exhibitions and shows from a wide selection of established artists from across the Arab world, ranging from Syria to Egypt, Sudan to Lebanon. This is in addition to collaborations involving international artists in order to boost the accessibility of regional work to the eyes of the world.

The gallery aims to expand its reach and showcase the Saudi visual culture and arts regionally and internationally, as it maintains the efforts to broaden its influence in the community.

Featuring eighteen new figurative works drawn from the surrealist world of the artist’s making. Charting the migration of a group of figures across a labyrinthine landscape of braided forests and dark waters, Agusto illustrates the surreal universe she holds in her mind, so titled, ‘Within.’

Widely known for his thick, gestural oil paintings Ben Quilty has explored a range of themes throughout his career. From the dangerous coming of age rituals of young Australian men, to the complex social history of Australia, he is constantly critiquing notions of identity, patriotism and belonging.

A solo presentation of a monumental work by leading Australian artist Patricia Piccinini, best known for her transgenic menagerie of disturbing, hyperrealistic creatures.