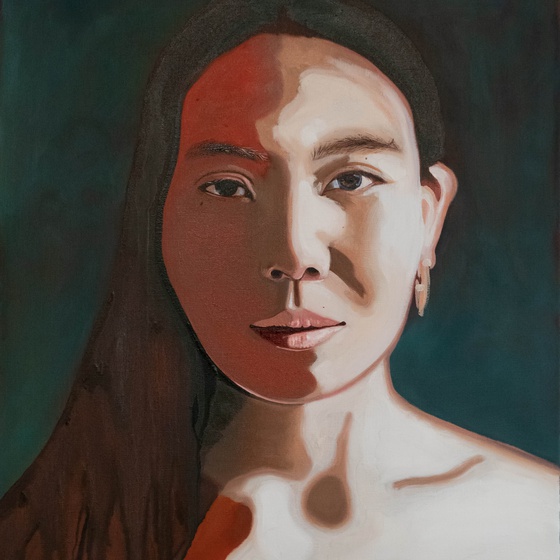 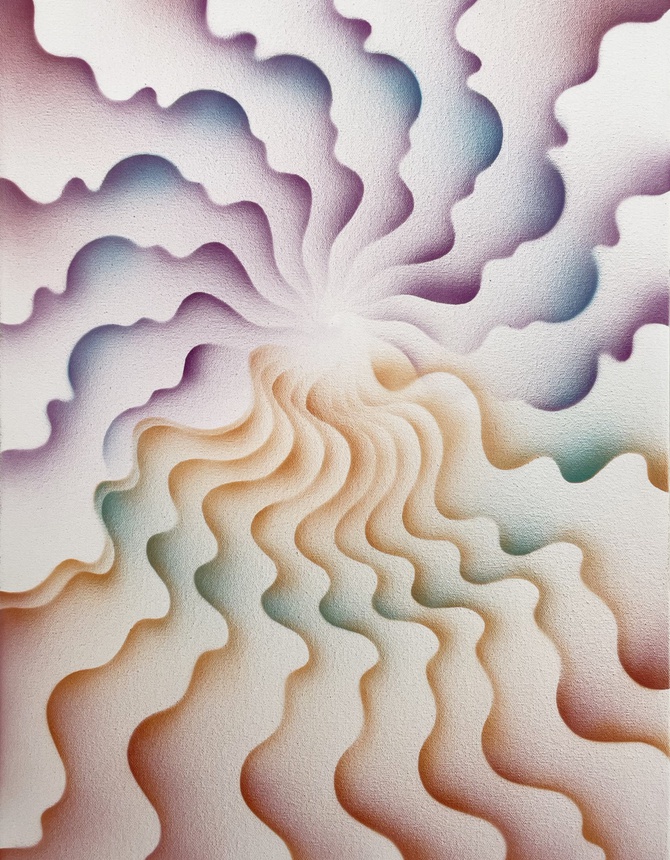 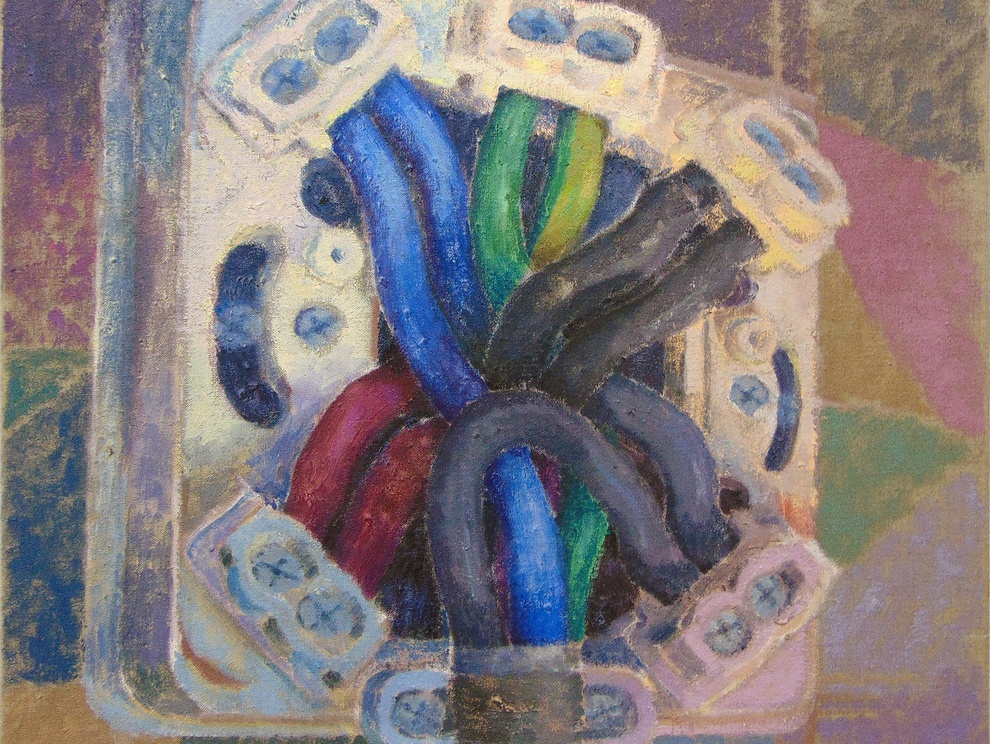 Examining the vernacular of beauty as an instrument for change, this group exhibition comprises of new works by Anthony Banks, Victoria Cantons, Diane Chappalley, Alex Gibbs, Eddie Ruscha and Xu Yang exploring the double entendre that lies between the designative and embodied meaning of beauty.

Beyond the Latin precision of the word beauty as ‘pleasurable to perceive’, the works respond to its spiritual and metaphysical weight. Borrowing its title from Dave Hickey’s series of essays on beauty: The Invisible Dragon, each artist addresses a duality in their own way, from beauty: in the mundane, in the complexity of identity, in otherness, to our relationship with objects and the environment. Different approaches are tied together by an idolatry of painting and a sentiment that despite the advances of technology, no other artistic medium is as nuanced and filled with possibilities. An image can change the world, there is such a thing as ‘before and after’ and what device is more democratic than beauty to engage individuals?

Victoria Cantons’ and Xu Yang’s paintings in this exhibition are both self-referential and about the other. Their work explores their romantic relationship, what it is to be a woman, and their social identity.

Victoria’s honest and unadorned portraits look straight at us, out of deep shadows. Her self- portrait, Most people don’t want you if you have a legacy or To be who you are demands a holistic approach, does much to entice the viewer but little to beautify her femininity as a 52 year old transsexual woman. Semaphore or A place of mutual exposure, on the other hand, depicts her partner Yang under harsh lighting, splitting her face in contrasting parts like a Ying and Yang symbol. These courageous paintings and their poetic titles are an invitation to covert reading, within which lies a richer reality and a more complex sense of community.

Yang’s portraits adopt the extravagance of Rococo and its allurement to participate in an illusionistic space. Her historically charged self-portrait, Perhaps we are all fictions in the eye of the beholder, references various 18th and 19th century paintings, both compositionally, in subject and dress. Exploring fantasies, desire and individuality, Yang takes cues from 18th century women who expressed their viewpoints through their styling. Her interest in exploring femininity stems from her personal experience of growing up in a patriarchal society in a traditional family in small town in China. Yang’s exploration of dress code became a way for her to rebel against authority, tradition, schooling, and society.

Anthony Banks and Alex Gibbs studied painting together and shared a studio for the three years that followed. Inadvertently their practice also overlaps: they both layer figuration with abstraction and often use sentimentality to enter into a dialogue with the viewer.

Alex Gibbs’ new series of paintings looks into male behaviour, particularly the compulsive mindset that comes with niche interests: how extreme enthusiasts might spend a lifetime obsessing over marginal differences in Boeing 747 aircrafts, while to the rest of us they are simply planes. This interest in precision and delving includes an array of pursuits that fall under the category of ‘spandrels’: traits that have no evolutionary value themselves by are by products of real aids of survival. In “Starkstromkabel” he turns a dangerous, high voltage connection cable into a beautiful object that reveals specialist knowledge, and a world that lies beyond the surface.

Anthony Banks uses abstraction as a path into work that is both ambiguous and figurative. The subjects in his new series of paintings: still lifes, landscapes and modes of transport are composites from memory which hold an allegorical tension. His scenes often begin with depictions of physical encounters that are then layered with subsequent experiences and his imagination. Using a contemplative process that lies between rehearsed and improvised, Banks uncovers overlooked elements in our day-to-day. He illuminates how these mundane encounters can be viewed as uncanny and beautiful when we allow ourselves the time to contemplate. To further the element of mystery in his work he employs internal framing devices, allowing separate compositions to co-exist on the same surface, opening up the possibility of different narratives.

Eddie’s new series of paintings are minimal, examining colour within a framework of abstract shapes derived from music. These works are inspired by the early disco movement, particularly The Loft in New York City, where likeminded and eclectic party goers in the 1960s and 70s were welcomed to a converted loft on Broadway with fresh fruit, ice cream parfaits, and LSD. It was a place where hundreds of balloons were released from the ceiling as multi-coloured orbs, whilst partygoers danced to disco, dub, and its variations through a state-of-the-art sound system. This kaleidoscopic experience is evoked in these paintings, which capture the inherently spiritual nature of proto-discotheques. Eddie's interest in music stems from his career as a musician who plays a combination of organic and electronic instruments, in order to take his audience to unknown and imaginary regions. His paintings share the visceral quality of his music — they are intended to have an immediacy and purity that needs to be physically experienced.

Diane Chappalley’s work uses metaphorical landscapes and symbols to reflect on intimacy and our relationship with the environment. Flowers are a reoccurring theme as an emblem of fragility and renewal. Her new paintings explore the snake as a representation of the end of life and rebirth, revisiting the duality of the snake in Cleopatra’s myth and the novella, The Little Prince. In La déchirure de sense, she explores the remnants of trauma and how they can inhabit the psyche: as a quiet presence that can be manifested if triggered. This metaphorical ‘tear’ in someone’s reality often challenges any sense of logic. Diane recently extended her practice to include ceramics, relating to Louise Bourgeois in her confession: “that it is only through the making of sculpture; bringing objects into the world, that one can fully exorcise our demons.”

Anthony Banks (b. 1988, Cheltenham, UK) lives and works in London. He completed his MA in Painting at the Royal College of Art (2016). Anthony previously obtained a postgraduate diploma from Royal Drawing School (2012) and a BA in Painting from University of Brighton (2010). His practice is focused on painting.

Victoria Cantons (b. 1969, London, UK) lives and works in London. She graduated with distinction in her MFA at the Slade School of Fine Art (2021). Victoria previously obtained a BA in Painting from Wimbledon College of Arts (2017) and studied Drama for The Stage and Screen at the Academy of Live and Recorded Arts (ALRA South) (1995-1997). Her practice includes painting, poetry, photography and video work.

Diane Chappalley (b. 1991, Gruyères, Switzerland) lives and works in London. She graduated with distinction in her MA at the Slade School of Fine Art (2017). Diane previously obtained her BA in Fine Art from City & Guilds of London Art School (2015) and her Foundation in Visual Art from Bern University of the Arts, Switzerland. Her practice includes painting and ceramics.

Eddie Ruscha (b. 1968, Los Angeles, US) lives and works in LA. He graduated from the California Institute of the Arts (1991). Eddie’s practice includes painting, music and video work.

Yang Xu (b. 1996, Shandong, China) lives and works in London. She completed her MA in Painting at the Royal College of Art (2020). Yang previously obtained a First Class Honours BA in Painting from Wimbledon College of Arts. Her practice includes painting, performance, video work and photography.

Cedric completed his MA in Contemporary Art at Sotheby’s Institute of Art (2013) and has nine years’ experience organising exhibitions, performances, and live events, as well as researching and writing for various print publications and online platforms.