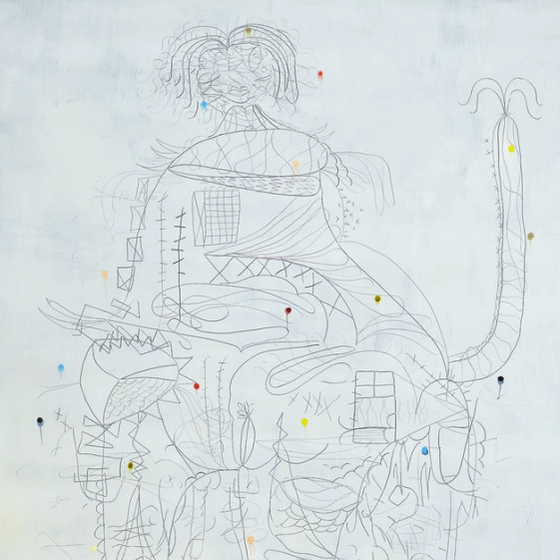 What's On / Current and Upcoming / Fermata

A group exhibition bringing together international artists for whom performative processes of making are vital to their practices.

The musical term, Fermata, historically refers to a sustained pause within a creative performance, the lingering on a particular note or phrase. Fermata is a device often used to open up new spaces for reflection, a pause between one gesture concluding and another beginning. Each piece selected for this exhibition can be seen as a punctuation point within an ongoing sequence of production. The word Fermata has its roots in the latin firmare 'to make firm'. It is the decision to stop working in the midst of an evolving idea and suspend a moment of making that enables such dynamic objects to take form and resonate.

In Charles Hadcock's new 'Idiom' series, repeated geometric compositions dance and interlock in a continuously evolving puzzle cast in mid performance. In Neha Vedpathak’s meditative ‘plucked’ Japanese paper works, suggestions of remembered places and moments appear within the material’s intricate webs. As paint binds the paper, the works shift between their ephemeral suggestions and the sculptural fixity that this unique process creates. There is an urgency in the incised lines of Alexi Tsioris's mythological figures. The painting shown is part of the artist's widely acclaimed Sgraffito series in which Tsioris scratches and carves linear constructions and allegorical symbols into the painted surface of the canvas.

Working collaboratively with ink on paper, Whitney McVeigh is guided by medium's fluidity to enable illusive and psychic forms to intuitively emerge. The images exist in a contingent space between the settled and the unsettled, the imagined and remembered. In his ongoing series of wooden wall sculptures, Adam Ball extends his subversion of painterly gesture through his exploration of elemental forces. Water carves the flowing forms of the sculptural reliefs whilst fire chars and burns their wooden edges. In Gerry Judah's painting 'Ark,' a scarred sculptural form rises from the canvas's white ground. Built up and then torn away, this recurring motif appears to be dug out of an archaeological site, the remnants of a past landscape emerging from an emptied flood plain.

Alexis Teplin's ‘untitled’ is a powerful note echoing within a wider performance of making. The artist interrogates the expanded field of painting through an exploration of the medium's wider context of labour, the politics of domesticity and historical quotation. Nicolas Feldmeyer's series of minimal watercolours first appear as a material exploration of light, line and reflection. However, on closer inspection, the artist opens up a window onto an imagined landscape, an atmospheric moment in which mist begins to clear
from the land.

The exhibition private preview will take place on Tuesday, 7 December. If you are interested in attending please be in touch directly with athorold@encountercontemporary.com.

Nicolas Feldmeyer (1980) was born in Switzerland and lives and works in London. After completing an MSc in Architecture in Zurich he went on to study Fine Arts at the San Francisco Art Institute on a Fulbright Grant. Feldmeyer received an MFA with distinction from the Slade in 2012. His work has been awarded the Saatchi and Channel 4’s New Sensations First Prize 2012 and the William Coldstream Prize amongst others.

Gerry Judah (1951) was born in Calcutta and lives and works in London. Judah studied Foundation Art and Design at Barnet College of Art, before completing a BA Fine Art at Goldsmiths College, University of London and Postgraduate Sculpture at the Slade School of Fine Art, University College London. He then set up his studio in Shaftesbury Avenue, in London’s West End and collaborated with the Royal Opera House, English National Opera, Royal Festival Ballet, London Contemporary Dance, Sadler’s Wells Royal Ballet, Royal Shakespeare Company and the Royal National Theatre. Taken with the public nature of this work Judah decided to find settings for his own art in more public arenas than just the rarefied spaces of conventional galleries. He created settings for the BBC, British Museum, Museum of Mankind, Natural History Museum, Imperial War Museum, Museum of Tolerance and musicians including Paul McCartney, Michael Jackson, Robert Plant & Jimmy Page and The Who. Judah was commissioned by the Imperial War Museum in London to create a large model of the selection ramp in Auschwitz-Birkenau for the Holocaust Exhibition opened by Queen Elizabeth II. In 2011, Judah went on to install ‘The Crusader’ at Imperial War Museum, Manchester and in 2014 he exhibited two monumental ‘Great War’ sculptures at St Paul’s Cathedral. He has also created important largescale works for the annual Goodwood Festival of Speed, bridges in London and Cambridge and monumental sculptures for institutions in Texas, New Zealand and the United Arab Emirates.

Whitney McVeigh (born 1968) is an American visual artist, best known for her paintings and installation art. She has travelled extensively to carry out her practice and held residencies in Mexico, India, China and South Africa. Her work investigates personal and collective memory and alludes to the layering of time.

Whitney McVeigh was featured in the BBC4 television documentary, Where is Modern Art Now (2009) alongside Sir Anthony Caro, Michael Landy, Grayson Perry and Cornelia Parker. Simon Schama’s recent essay on McVeigh’s practice ‘The Happenstance of Illumination’(2018) was included in his book Wordy (Simon & Schuster), published in June 2019. Her work was recently included in ‘Imagined Spaces’ edited by Kirsty Gunn & Gail Low with Voyage Out Press & Saraband Books, an anthology that creates a “space” between understanding and the imagination.

Alexis Teplin lives and works in London. Teplin’s work begins within the history of two-dimensional painting and expands to include performance, video and sculpture. Her work explores the nature of painting through its relationship to historical quotation, labour, cultural politics and positions of decadence. She received her M.F.A. from Art Centre College of Design, Los Angeles in 2001 and was the Starr Fellow at the Royal Academy Schools in 2002.

Alexi Tsioris, (1982) Athens, lives and works in Munich. In his artistic work, Alexi Tsioris concentrates on the mediums of drawing, painting, monotype, and sculpture. Through these, the artist pursues one idea in particular: he layers bodies and figures, thus reproducing what is individual in the corporeal and symbolically turning the human being inside out. In his painting, engravings in layers of oil paint expose colors and forms, supplemented with an abundance of ornamentation. After the artist had already been awarded the Art Prize of the Bavarian Academy of Fine Arts in Munich in 2011, he also received the Bavarian Art Promotion Prize for Fine Arts last year. Recent solo exhibitions include; ‘Alexi Tsioris,’ Livie Fine Art, Zurich (2020), ‘Cosmic Fruits,’ Jahn und Jahn, Munich (2020), ‘Fluss ohne Ufer,’Kunstpavillon Alter Botanischer Garten, Munich (2018), ‘Belladonna,’ Artothek & Bildersaal, Munich (2017), ‘Flaum & Splitter,’ GalerieJahn Baaderstrasse, Munich (2015) and ‘Attic Studio,’ Galerie Christine Mayer, Munich (2015). In Autumn 2020 Tsioris participated in ‘Artist Rooms’ at Encounter Contemporary marking his first project in London.

Operating from several key sites across London, the gallery runs an international ‘moving’ exhibition program curating academically rigorous and immersive projects. They work closely with a core group of leading emerging and established contemporary artists helping to develop their practices through curatorial collaborations, critical exposure and sales. The program is particularly engaged with artists whose sophisticated material languages open up new spaces of conceptual investigation. Since its inception, Encounter has focused on building dynamic relationships with both new and established collectors, institutions and foundations who are dedicated to supporting diverse contemporary art practices.