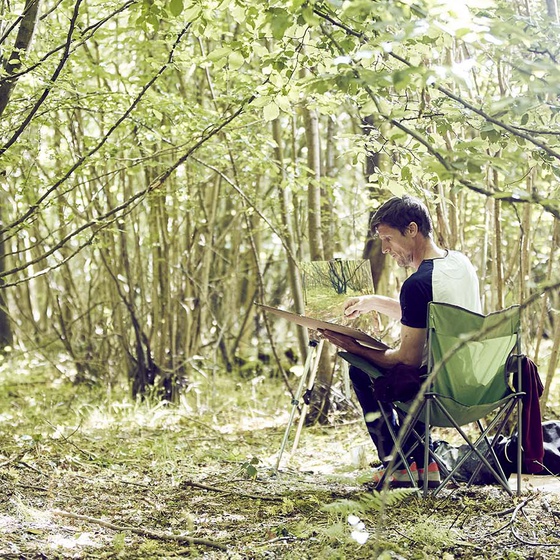 What's On / Current and Upcoming / Alone with Trees, Andrew Gifford

A solo exhibition of recent paintings by Andrew Gifford from his series depicting Hawthorn trees.

The Hawthorn doesn't appear like a typical tree, more an unstructured confusion of thorns, blossom and branches, tangled up in every direction, and seemingly impossible to draw. Andrew Gifford's first, minutely observed spring studies were to form the start of a series of increasingly complex paintings of Hawthorns and woodland made over the next three years and across every season.

In early 2020 Gifford began to paint within the woods themselves. Like the Hawthorns, the coppiced woodlands he walked through shared the same mesmerising, unstructured chaos. “I wanted to make paintings that immersed you in the woods, where your senses could be overwhelmed by the confusion of branches and brambles and sunlight. After the Hawthorns, the woods were a different challenge – I had to find compositions that could work as paintings, but still felt arbitrary”. Gifford returned most weeks to paint the same place. During the winter months he painted silver birches in the late afternoon sun, but with lockdown and the better spring weather, the woodland floor was transformed with fast-moving, dappled sunlight lighting up clumps of bluebells, nettles and moss and creating new rhythms of colour around the multiple stems of coppiced hornbeams, hazels and birch.

In the spring of 2018 there was a particularly intense blossoming of Hawthorn, a tree with such a history of myth and superstition. I started painting them on the South Downs and continued over the seasons.

The gallery has participated in numerous art fairs in Europe and the US and has collaborated on exhibitions with public institutions including Leeds City Art Gallery, Penlee House, Middlesbrough Art Gallery, Fruitmarket Gallery and the V&A. The gallery will present new artists, large-scale exhibitions and use the member spaces for meetings and administration.

The Possibility of an Island

An introduction into the incredibly vast, diverse and extremely vibrant contemporary art landscape of Southeast-Asia.

Spanning two galleries and five millennia, this exhibition explores the concept of time and eternal life from Antiquity to the Modern Era.

Lustrous ceramics and beautiful, jewel-like canvases by William and Evelyn De Morgan are presented by the De Morgan Foundation in this breathtaking exhibition.