What's On / Past exhibitions / Alfred Basbous: Figurative to Abstraction

The Alfred Basbous Foundation in collaboration with Tabari Artspace will present an exhibition dedicated to the work of the modernist Lebanese artist of the twentieth-century: Alfred Basbous.

Alfred Basbous was born in 1924 in Rachana, Lebanon (close to the historic city of Byblos). He was a central figure in the development and advancement of Modernism in the Middle East during the latter part of the twentieth century. Basbous was the organiser of the first symposium in Lebanon and the region. From 1993 to 2004, international sculptors were invited to exhibit work, transforming Rachana, into an open-air museum. In recognition of Basbous’s unparalleled contributions, the sculpture park was recognised as a UNESCO site, in 1997. Basbous has a legacy rooted in cultural exchange with significant European sculptors from his tutor at École Nationale des Beaux-Arts of Paris, René Collamarini to his encounters with Henry Moore.

The exhibition, Figurative to Abstraction, reveals Basbous’ exploration of the relationship between form and material - from wood to metal - in addition to a preparatory drawing revealing his personal approach to sculpture.

The Alfred Basbous Foundation committee has selected works that demonstrate Basbous's artistic aesthetic, offering a glimpse into what will be shown in the Foundation in Lebanon in the future.

The political and economic situation in Lebanon, in addition to the pandemic, has forced us to rethink the structure of the Alfred Basbous Foundation as well as the space dedicated to his work in Rachana.

Currently, ongoing work is taking place to reconstruct Alfred's studio, redevelop the showrooms and install the archives and reserves. Likewise, the outdoor area and the garden have been restructured in harmony with the building. This space will present the artist's monumental work which has so far remained in the reserves.

The Alfred Basbous Foundation plans to open its doors to the public with a temporary exhibition curated by Pascal Odille on the theme of diversity in Alfred’s artistic practice.

Alfred Basbous was born in 1924 in Rachana, Lebanon. He was a central figure in the development and advancement of Modernism in the Middle East during the latter part of the twentieth century. The sculptor’s first exhibition was at the Alecco Saab gallery, in Beirut in 1958. He was the recipient of a scholarship from the French government in 1960 and the student of renowned French sculptor René Collamarini at Ecole Nationale des Beaux-Arts de Paris. In 1961 and in 1966, Basbous’s works were included in the International Sculpture Exhibition at the Musée Rodin, in Paris.

He participated in the "Atelier de Collamarini" exhibition in 1974 at Musée Rodin. Basbous exhibited extensively across the MENA region and beyond, particularly in France, England, the USA and Japan. The artist's philosophy, grounded in simplicity, prioritised aesthetic principles of shape, movement, line and material. In the tradition of sculptors such as Jean Arp, Constantin Brâncuși and Henry Moore, Basbous’s sculptural works - predominantly in bronze, wood, metal, and stone - express a lifelong appreciation of the purity of the human form, in particular the female body, and its abstract properties.

The art of Alfred Basbous is part of several international public and private collections including the Ashmolean Museum in Oxford, the Hakone Open-Air Museum in Japan, the Musée Rodin in Paris, as well as Villa Audi, Sursock Museum and the Parliament in Lebanon. 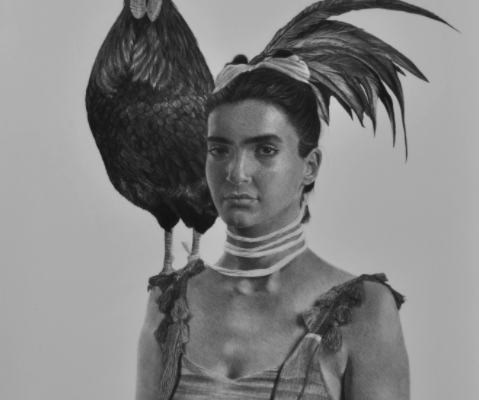 Running as a precursor to and alongside ‘K-Wave’ at the Victoria and Albert Museum (September 22 – June 23). The included works consider the meditative aesthetic of Korean craftsmanship, exploring how this can help us find tranquillity and consolation in turbulent times.